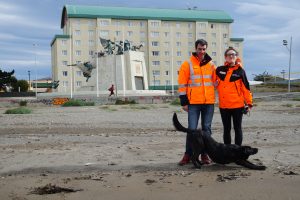 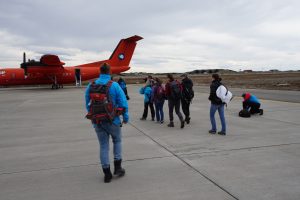 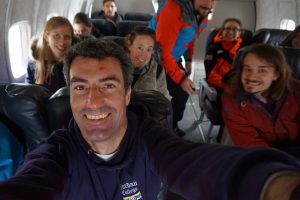 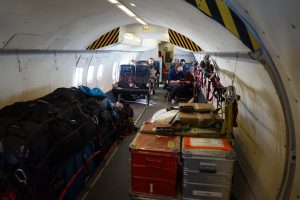 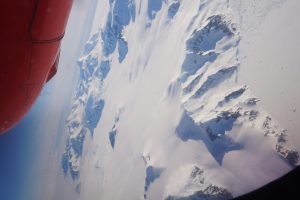 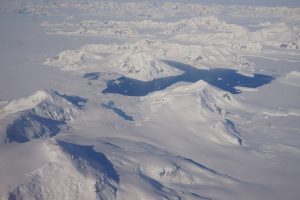 Briefly the southern ocean has just made an appearance through the low cloud. I’m on board the Dash 7 en-route from Punta Arenas to Rothera. Our boarding passes were blank, but we entered the normal security lane. Liquids weren’t a problem on this flight. The police opened up a special booth and processed our passports while we sat and waited. Then we were lead out of departure via a backdoor, and down a ramp, pushing past some barriers with a certain carelessness. Across the tarmac we walked in single file to the waiting plane. From outside, the smart orange paint gives a sense of newness but inside the faded brown decor dates the plane to the 80s. The button above my seat labelled with a woman in a short skirt are unlikely to bring a hostess, as the only service on this plane is a chemical toilet and a self-service kettle. The seats are at the back of the cabin and the cargo is netted down in front of us. No patronizing lecture about seat belts – our pilot addresses us one-to-one and suggests that whilst it is ok to come up to the cockpit, we should not disturb them if they are talking on the radio. Our Canadian flight-engineer sits in the back on a deckchair, reading a book. The day before we’d sat in the hotel watching a safety video. It included how to launch the life raft, a sobering thought, and I think of my diving suit, hoping it is accessible in the luggage. A dry sandwich and a runny yogurt in a brown paper bag are our provisions for the journey. I managed to get the front row seat for being the tallest, but I miss out on the window seat. After the crew have carefully checked the plane over and the military jets have cleared the runway, we take off to the roar of the four turbo props. I realise I can’t access my sound recorder but this will be a noise I will try and capture when we land. We steadily climb and thenbank left, leaving a spectacular range of snow-capped mountains out of the right windows. I look around at my passengers, and think to myself it would be worth learning each of their histories. Over dinner the night before I had already picked up on various vignettes of each of their lives. Working in Antarctica is not a job, it’s a calling.

It seems to me we are now cruising over the Beagle Channel, but I make a mental note to ask the pilots about our route. Flying over the Drake in just 5 hours is really different to the two-day crossing in 10m waves I’d made 2 years before. The flight is very smooth, and despite a warning of turbulence, there was none. No hint of the most world’s most notorious seas that are down below.

The view soon disappears into cloud, and with the seat belt sign off, we’re free to move around the cabin. Kirk, our Scottish film making colleague is busy with a variety of cameras, catching every moment. Sleeping, chatting, reading; the passengers soon settle in. I guess for everyone here, flying is fairly routine, but I think to myself how much I prefer this kind of flying to commercial air travel. Perhaps it’s because I don’t like being herded like a sheep, treated as just another body to load on and off the metal transport, or maybe it’s because a plane like this brings one much closer to the reality of flying. I look around the cockpit, now the door is open and the meteorologist has come back in to the cabin. Every instrument is clearly labelled, 4 of everything to match the 4 engines. It reassures me that we have this much redundancy, and that this old analogue technology is probably more dependable than digital. However, I note modern sat navs and an ipad have been added to the cockpit. In the cabin, the only nod to modernity is the ash trays that have been glued shut.

In the back, the flight engineer is making the crew tea. He laments the fact that this aircraft is coming to the end of its serviceable career, and he will soon have to retrain on another model. Is it comforting or disquieting to know that he is ready in the back with his tool box, should something break? I decide to play air steward, making a few cups of tea. Working in the galley is not dissimilar to a boat, and I take satisfaction in slamming a few cupboard doors shut, just like the air crew of airliners do, normally as I am just falling asleep.

I take some time to do a pencil sketch of the cabin; paper might be in short supply so I use the back of my flight printout. It’s not much good, but it passes time and it make me observe my surroundings more carefully, noting details of the 80s decor and equipment. It’s something that has been lost with the enthusiasm for digital photography, the art of really looking.

There is a monkey hanging in the cargo net. I wonder how many air-miles he’s amassed, probably more than the crew. Just 2 hours to go now, and I will be landing at my new home. I still cannot imagine what my feelings will be, when this aircraft departs and I’m standing on the snow, unable to leave for 18 months.

I’m struck by a thought a friend shared with me… There is a need for pragmatism that draws people out here that no longer exists in our modern world, and perhaps that is the appeal. That some of us want to live on the edge of society, in the frontier lands, rather than be comfortably enshrined in technology. Cargo has joined us and I think about the shipping networks that exist. I realise how little I know about the world, the workings of an airport or how the shipping industry works. What would I understand about chartering a container ship or the bewildering array of instruments on the flight deck? Modern air-travel shields us from all the workings but here it is laid bare, and it fascinates me.

I’m wondering if were on radar this far out. The only SAR is from Rothera, and I didn’t see an EPIRB on board.

Most of the passengers have been here before, only the overwintering electrician and an architect are new from the British side, and two young students from the Netherlands, who are sat playing on their computer consoles; more interested in that than looking out the view. The peninsular is now below us, but invisible in the cloud. At the airport I’d noticed was a gleam in everyone eyes: excitement? Talk has mainly been of the bases upcoming redevelopment. Will solar panels power our future energy needs? Do we want a sauna? A gym? I suggest a ball-room, a high-ceilinged multifunction room that could be used for exercise classes, socialising and presentations. We talk about the need to have one efficient building to save energy, yet the need for redundancy in case one is lost to fire. I learn of the walk-in costume cupboard, apparently dressing up is a big thing here, a kind of winter madness. It initiates a dream late that night where we are greeted by last year’s overwintering team, all of whom have become transvestite goths, with thick white makeup and staring eyes.

Only 1.5 hours to go. We’ll be arriving in time for dinner hopefully. I drink more water, it’s very dry here and no amount of water seems to moistening my lips or throat.

Little bits of ice are formed in patches below, like mould growing in a petri dish. The broken soft cloud blends with the white, so the boundary between sea and sky is unbroken. The plane is lit with dazzling white light. In the distance, snow covered peaks loom so high, at first I don’t see them as my eyes had fixed on too low a horizon. Thick ice is visible still clinging to the shore.

The oceanographers are discussing boats. I realise how lucky we are, this hand-picked few of us that get to play out here. In a recent magazine article, I had learnt how people are willing to pay $40 000 for a week out here on the snow. Of all our colleagues back home, we’ve been the few chosen to come out here and experience this.

I am typing this in my room, and will write about the station, but the 24 hour daylight is keeping me up right now, so I will post this.

Notes primarily to myself, but perhaps also useful for someone else…

I reserve the right to be proven wrong and to change my mind as a result.